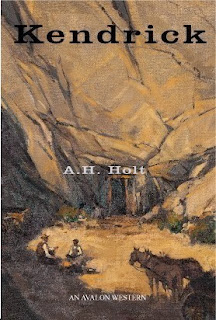 You might recall an article we did way back when about a book called Silver Creek that was written by AH Holt. I referred to it as a book that would fit right in with the books written by Louis L'Amours and Kathy liked it enough that she thought that it was better than that and should be in a higher class. Well Kendrick is Holt's newest book and it also is a super novel. It's easy reading, has a great story, super characters, good suspense, a little romance, and a great ending. It's another book that is hard to put down once you get it open!

The basics of the story are that Kendrick's friend was kidnapped and his property was taken and split up and sold as mining claims. Holt did a great job, all in 1st person, of describing the bad guys
and how cold blooded they were. Ken disguised himself as a miner and buys a claim so that he can see things from the inside and try and rescue his friend - if he's still alive. There are a couple of females in the story just to keep things interesting and the rest you'll have to read yourself. It was a good book and I'm sure you'll enjoy the story.

Published by Avalon Books, Kendrick is now available on Amazon in hardcover, paperback and KDP! TYPE in Kendrick, Holt

Posted by Anne Haw Holt at 6:48 PM No comments:

RIDING FENCE
By A.H.Holt
Thomas Bouregy&Co., AVALON BOOKS - hardcover
Amazon - Paperback and Kindle
ISBN : 0-8034-9801-2, September, 2006
Western
-------------------------------------------------------
RIDING FENCE is set in Kansas in the late 19th century and is an old-fashioned western that combines romance with a lot of action, mystery and adventure.
The story is about Dan Smithson, a cattleman living in a ranch with his brother Henry, and his unexpected discovery of two kids in the woods. Still under age, he falls in love with Anne Marie, a 17-year-old heiress whose life is in danger. Will he manage to protect her and kill the villains that are looking for her? Is Anne Marie going to fall in love with him and marry him despite his humble background?
RIDING FENCE is a fast-paced western that involves a lot of shooting, suspense and interesting characters. Written in the third person, it offers the readers an exciting plot assisted by sub-plots that enhance and strengthen the story.
The story, apart from the fact that it is well constructed, offers the readers an unusual ending: action and suspense till the very last lines. There is no conventional epilogue in this book, and this resembles a movie scene rather than a part of a book. The characters in the story are believable and depict the real human virtues and vices: the good guys fighting the bad ones, as we usually see in a western movie. The heroes fight against odds and consequently beat the villains, thus satisfying the readers’ sense of justice in this world. The writing style, which is simple enough for everybody to read, is enhanced by spontaneous local dialogue and evokes vivid images throughout the plot.
A.H.Holt, a historian , is an expert in narrating a cowboy’s story back in the 19th century, using all the devices her own experience and her studies can offer. She is also a poet and novelist and a Ph.D holder in history at Florida State University, and a great –grandmother. You can visit her online at: www.ahholt.com
RIDING FENCE is a good read for all the family, both teenagers and adults who love romance, action, mystery and suspense. You can get this book from:
Barnes & Noble, Amazon (look up RIDING FENCE HOLT)

Posted by Anne Haw Holt at 3:23 PM No comments:


Journey by the Sackcloth Moon
a novel by K. B. SchallerJourney by the Sackcloth Moon by K. B. Schaller offers the reader a glimpse of the cultural difficulties faced by a young Native American woman seeking her place in modern America. Dina Youngblood is part Cherokee, a people who tried but failed to live comfortably in the white world and part Seminole, proud men and women who never surrendered.  This dichotomy is her heritage.
A professed Christian, Dina’s life is a daily struggle to serve her people without being drawn into the dark shadows surrounding her. She openly acknowledges the mystery of her people’s culture and uses her religion as a bulwark against it. Sometimes she is successful and sometimes the forces overcome her.
Moving from one culture to the other, Schaller artfully wove Dina’s life dilemma into an enthralling story of a young girl’s struggle to choose between two loves. One is a prominent and respected man who represents all that is good and safe in her life—the other is an old flame who represents all that is dark and wild and exciting.
Dina’s struggle to find peace and her true place in life is compounded by the hidden treachery of supposed friends. She is helped and protected in her quest by her strong belief in God and by unseen forces she will never understand. Journey by the Sackcloth Moon is a good read—a real page-turner.

Posted by Anne Haw Holt at 6:46 AM No comments:


WE ONLY REVIEW WESTERN FICTION OR POETRY

Your book must be printed--complete---a real book, and it must be family-friendly to be considered for a WesternFictionReview.

To request a review please send a concise description of your book, the ISBN number, your publisher's name and complete mailing address, the books release date and a short description.  We'd like to know if your book is hardcover or paperback, its price, how many pages it has and who your distributors are.  It also helps to know something about the author.  Please send this request in an email to        Ahholt@ahholt.com

Posted by Anne Haw Holt at 6:26 PM No comments: